By Derek Hernquist No Comments

It’s 1957, and the Standard & Poor’s Index is updating from 90 stocks to 500. Your assignment is to select and organize the constituent stocks, using career achievement(defined by total equity value) as the primary input for both selection and weighting. From there, the index floats into the future with a “No Sell” rule until a stocks is retired voluntarily(by merger) or forcefully(by bankruptcy).

Now imagine you’re building a fantasy NBA/NFL/MLB/NHL roster. Rather than trying to predict/guess the best players, you mimic S&P’s approach, selecting and weighting your selections using past success. Career totals…points for basketball, yards or touchdowns for football, hits or home runs for baseball, goals for hockey. Your roster stays intact going forward, with a player’s weighting dictated by their evolving career totals relative to other players. Your sell discipline is the same as the S&P 500…retirement. A rough sketch of our top selections would look something like this: 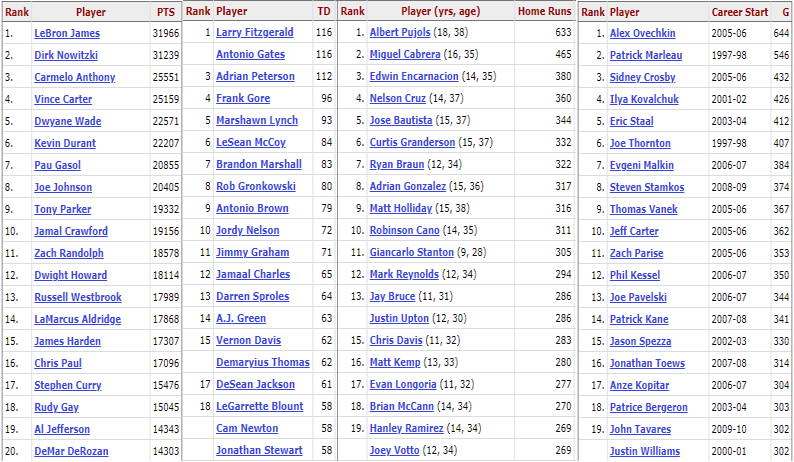 We now have a rules-based index, with a clear positive(never miss a stock/player who grows into an all-time great). We’ll only be able to dabble in rising stars, as most of our capital goes to players whose success is already lengthy and quite obvious.

But we also have a clear negative; no way to adjust for the day when their value creation is in the rear-view mirror. Jim Brown, Wilt, Hank Aaron, Kareem, Jerry Rice, Michael, Bonds, you name the superstar…they’ll have their greatest weight in our payroll in their final years when skills are diminishing and future success is least likely.

We would never build a roster that way, but is it the right way to invest? I love that a rules-based index will never miss the greats, but hate being late to the party and stuck once I get there. I’m not asking for detailed scouting reports or predictive algorithms; can I just weight my holdings on something other than past success? And for goodness sake, do I need to hold every aging All-Star when they no longer resemble the production machine that made them famous?

It’s incredible how much cap-weighting dominates new asset flows, but critics undervalue a few features that make it an attractive option for many investors. Low cost, liquid, simple…all great attributes. Not enough(for me) to overcome the lack of sell discipline, but to Winston Churchill’s line about “all those others” it’s a solid default. A recent look at the S&P’s Top 20, comprising almost one-third of total exposure: 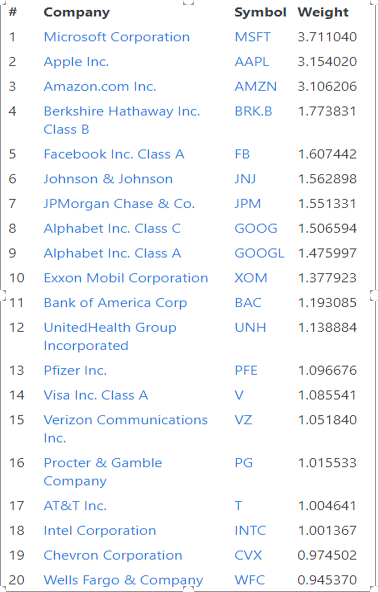 I don’t know, some future value creation there but also a handful known more for what they’ve done than what they’ll do. I’m not a forecast guy, but can’t I get more bang for my buck? I’m not asking for a peek at the 2030 version of this list, I just want a more dynamic process for updating my allocation.

I’ll save prescriptive ideas for another post, but let’s start with the basics of improvement. Equal-weighting(or just about any other weighting system) would quickly solve one flaw in my allocation; I immediately get more Steph/less Dirk, more Gurley/less Gore, more Stanton/less Pujols, more Tavares/less Thornton. Can I go further, to entirely clear “low upside” guys from my roster before they become a GE, Kodak, or heaven forbid Enron?

Sure, but how? Personally, I defer to recent performance(price momentum) because I don’t have the skills to interpret company fundamentals. But if someone has a repeatable process based on valuation or earnings quality or some other combo of factors, I firmly believe their “roster” can be improved.

Where this ultimately fails is the lack of a repeatable selling process, just like we often see in professional sports. Whether it’s loyalty or blindness or performance pressure, clearly more effort is put into new purchases than into moving on from prior purchases. Again, a momentum filter can play a role here, but nearly every GM and portfolio manager rationalizes the roster and can become fearful of letting go too early or too late.

Both investment management and professional sports have seen widespread adoption of rules-based approaches to evaluating new opportunities. Where I think the opportunities exist(and the above referenced paper seems to confirm) are in more timely, objective, repeatable processes for simply removing dead weight from portfolios and rosters. Too much to ask?

We’re All Coaching Someone